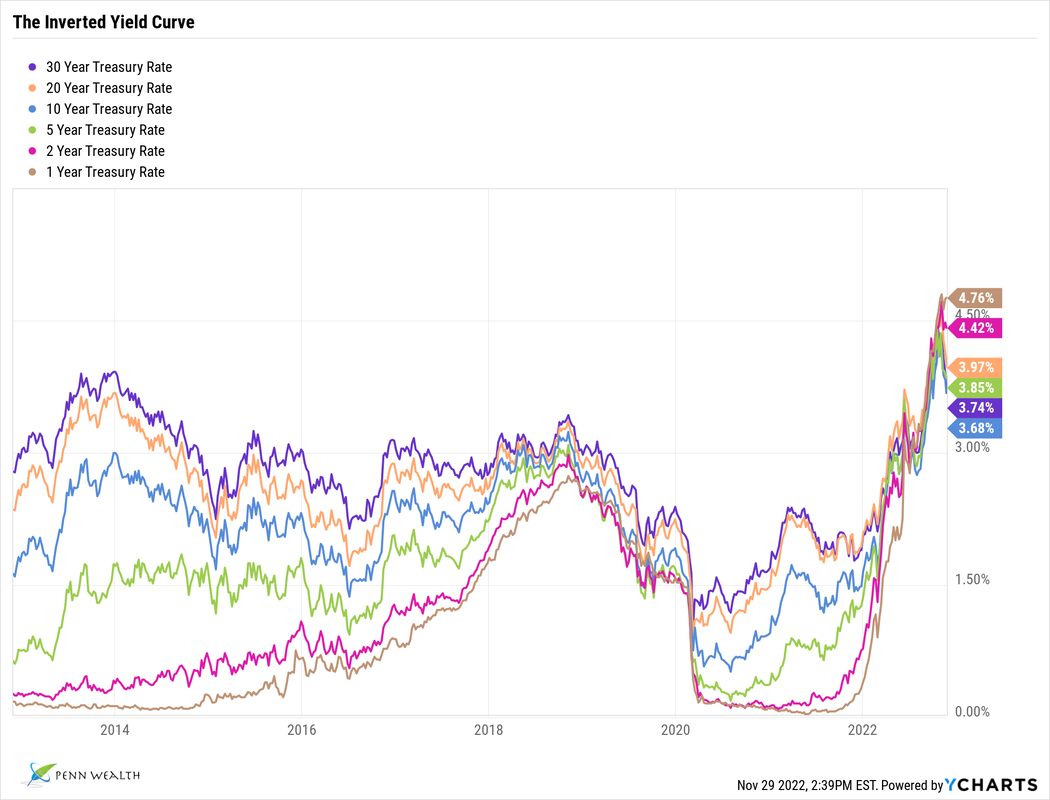 Ladder of Current Fixed Income Issues and Penn Weighting Guidance*
*Please note: the above are examples for rate comparisons only; there is no guarantee these issues will still be available, as they are in limited quantities
A disturbing look into the world of fixed income during the downturn. (14 Mar 2020) A lot of wretched things occur to investments during market downturns, but there has always been one stabilizing truth: As equities are plummeting, bonds serve as the beacon in the storm—the one asset class that is most often inversely correlated to stocks. Bond values go up while equity values drop, right? With the global fiscal irresponsibility that has been the norm since the financial meltdown of 2008/09, we can officially throw that paradigm out the window. After three bruising weeks in the market, we took this "golden opportunity" to review eleven popular fixed income holdings. We didn't cherry-pick: they run the gamut of choices, from government bonds to corporates to high yield to emerging markets, and what we found is disturbing—especially considering the Fed lowered rates 50 basis points in the middle of this time-frame, which should have buoyed bond prices. Take a look at the accompanying chart. Two fixed income categories actually underperformed the S&P 500: high yield bonds and convertible securities. Only one category was in the green: US Treasuries, as represented by the iShares US Treasury Bond ETF (GOVT). The second-highest performer in our group was the Invesco Total Return Bond ETF (GTO), which holds a nice mix of government bonds, corporates, and securitized notes (think packaged baskets of mortgages and other debt obligations), which lost only 3.71% over the last three weeks. The third-best performer, with a return of -4.26%, was the iShares TIPS Bond ETF (TIP), which we have used as a hedge against inflation. If there is one message to be gleaned from this exercise, it is that old paradigms have been turned on their head thanks to a stew of fiscally irresponsible ingredients. If it is of any comfort at all, at least our money market funds have yet to break the buck. An extended discussion of this topic will appear in the next issue of The Penn Wealth Report. 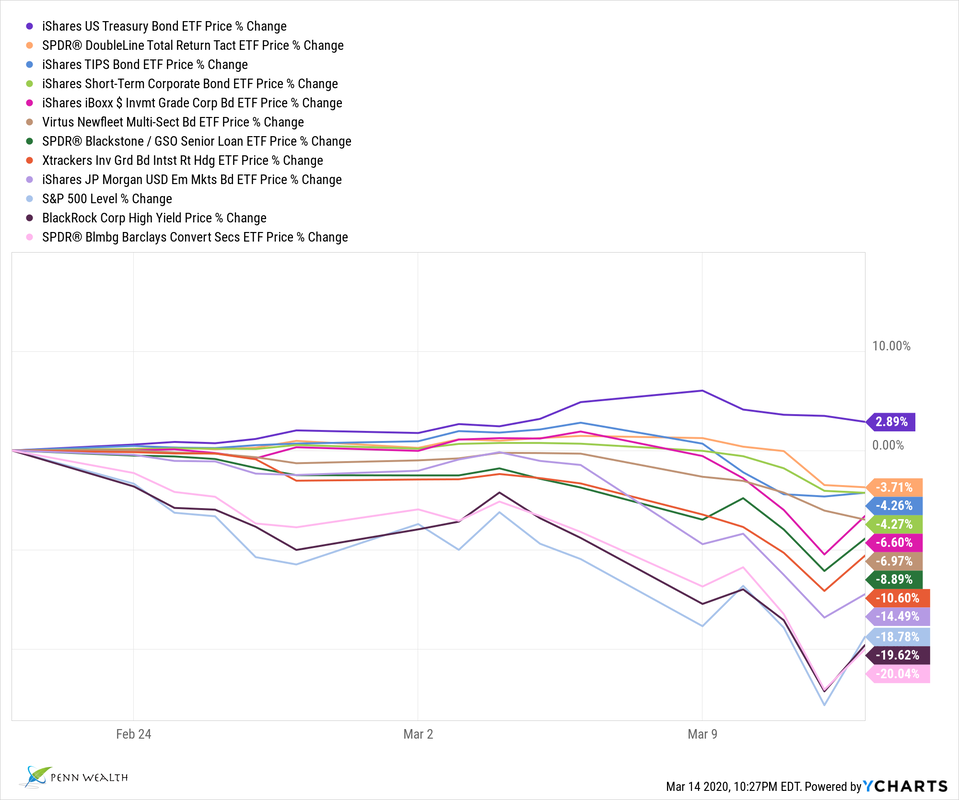 Penn: Upgrade Intermediate-Term Issues from "Underweight" to "Equal-weight." (19 Jan 2019) Now that the Fed is nearing the end (or at the end!) of its quantitative tightening (QT) cycle, we believe it is safer to begin buying intermediate term bonds once again. Like the middle of one side of a teeter-totter, the value of intermediate-term bonds go down when rates go up (the other side of the teeter-totter), but less-so than longer-term bonds. It is now safe to make about one-third of your fixed income portfolio investment-grade intermediate-term corporate bonds. However, steer clear of lower quality (junk) bonds and longer-term instruments, like preferreds, until we get further clarification from the Fed.
Treasuries turn lower on slump in homebuilder confidence levels. (26 Nov 2018) First it was concern over rates going too high too quickly on the back of consistent Fed hikes. Now, thanks to the downturn in homebuilder sentiment, we are seeing real yields actually drift lower. The benchmark 10-year Treasury, for example, topped out at a 3.263% yield in the first week of October, but now carries just a 3.069% rate. The 2-year T note isn't far behind, at 2.796%. In other words, why would investors take on the added duration of the 10-year for such a small comparative advantage over the 2-year? Rate "normalization" suddenly looks a lot lower than it did when the Fed began raising its FFR precisely three years ago. As for homebuilder confidence, the NAHB's confidence index fell by 8 points in November, to a level of 60 (any level above 50 is considered expansionary, while levels below 50 reflect a contraction). One of our current fixed income picks is a 5.5-year JP Morgan step-up CD yielding between 3.1% at the start to 5.5% at the finish. The CD, cusip 48128FS29, has a survivor's option.
Penn adds Goldman Sachs fixed-rate note to Strategic Income Portfolio
(11 May 2018) It takes a real fixed income geek to get excited about a short-term, 3% note, but that is what near-zero rates have done to us. On Thursday we added a new issue Goldman Sachs two-year note to our individual issues within the Penn Strategic Income Portfolio. The note, cusip number 38150A6Z3, pays semi-annually, is callable on or after 24 Nov 2018, and matures on 24 May 2020. Goldman has a Moody's/S&P rating of A3/BBB+. Our goal is to slowly start adding to our fixed income asset class with these shorter-term holdings with the full expectation of higher rates when they mature—allowing us to rollover the proceeds into a higher-rate vehicle. On our fixed income ladder, we are very heavy on the lower-duration rungs and extremely thin further out (past five years). As rates rise, we will begin to level out the longer maturity/duration rungs. For the current Treasury yield curve, visit our Fixed Income page.